Cultural Relativism in Clinical Trials: Composite endpoints are good enough for Cardiology, but not for Pulmonihilism and Critical Care 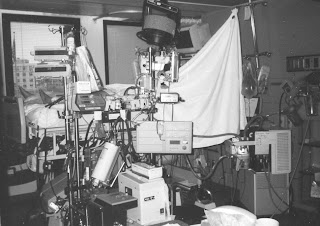 There are many differences between cardiology and pulmonary and critical care medicine as medical specialties, and some of these differences are seen in how they conduct clinical trials. One thing is for sure: cardiology has advanced in leaps and bounds in terms of new therapies (antiplatelet agents, coated stents, heparinoids, GP2B3A inhibitors, direct thrombin inhibitors, AICDs, etc.) in the last 15 years while critical care has....well, we have low tidal volume ventilation, and that's about it. Why might this be?

One possible explanation was visible last week as the NEJM released the results of the PROTECT study - http://www.nejm.org/doi/full/10.1056/NEJMoa1014475 - of Dalteparin ("Dalty") versus unfractionated heparin (UFH) for the prevention of proximal DVT in critically ill patients. Before we delve into the details of this study, imagine that a cardiologist was going to conduct a study of Dalty vs. UFH for use in acute coronary syndromes (ACS) - how would that study be designed?


Well, if it were an industry sponsored study, we might guess that it would be a non-inferiority study with an ϋber-wide delta to bias the study in favor of the branded agent. (Occasionally we're surprised when a "me-too" drug such as Prasugrel is pitted against Plavix in a superiority contest.....and wins.....but this is the exception rather than the rule.) We would also be wise to guess that in addition to being a very large study with thousands of patients, that the endpoint in the cardiologists' study will be a composite endpoint - something like "death, recurrent MI, or revascularization," etc. How many agents currently used in cardiology would be around if it weren't for the use of composite endpoints?

Not so in critical care medicine. We're purists. We want mortality improvements and mortality improvements only. (Nevermind if you're alive at day 28 or 60 and slated to die in 6 months after a long run in nursing homes with multiple readmissions to the hospital, with a tracheostomy in place, on dialysis, being fed through a tube, not walking or getting out of bed....you're alive! Pulmonologists pat themselves on the back for "saves" such as those.) After all, mortality is the only truly objective outcome measure, there is no ascertainment bias, and no dispute about the value of the endpoint - alive is good, dead is bad, period.

Cardiologists aren't so picky. They'll take what they can get. They wish to advance their field, even if it does mean being complicit with the profit motives of Big Pharma.

So the PROTECT study is surprising in one way (that proximal DVT rather than mortality was the primary endpoint) but wholly unsurprising in others - the primary endpoint was not a composite, and the study was negative overall, the conclusion being that "Among critically ill patients, dalteparin was not superior to unfractionated heparin in decreasing the incidence of proximal deep-vein thrombosis." Yet another critical care therapy to be added to the therapeutic scrap heap?

Not so fast. Even though it was not the primary endpoint, the authors DID measure a composite: any venous thromboembolism (VTE) or death. And the 95% confidence interval for that outcome was 0.79-1.01, just barely missing the threshold for statistical significance with a P-value of 0.07. So, it appears that Dalty may be up to 1% worse than UFH or up to 21% better than UFH. Which drug do YOU want for YOURSELF or your family in the ICU? (We could devise an even better composite endpoint that includes any VTE, death, bleeding, or HITS, +/- others. Without the primary data, I cannot tell what the result would have been, but I'm interested.)

I don't have an answer for the question of why these cultural differences exist in the conduct of clinical trials in medicine. But I am pretty certain that they do indeed exist. The cardiologists appear to recognize that there are things that can happen to you short of death that have significant negative utility for you. The pulmonihilists, in their relentless pursuit of untainted truth, ignore inconvenient realities and eschew pragmatism in the name of purity. The right course probably lies somewhere in between these two extremes. I can only hope that one day soon pulmonary and critical care studies will mirror the reality that alive but bedridden with a feeding tube and a tracheostomy is not the same as being alive and walking, talking, breathing on your own, and eating. Perhaps we should, if only in the name of diversity, include some cardiologists the next time we design a critical care trial.