HFOV Fails as a Routine Therapy for moderate-to-severe ARDS. Musings on the Use and Study of “Rescue Therapies”. 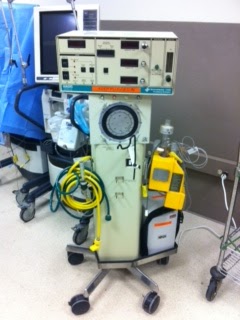 Ferguson et al report the results of the OSCILLATE randomized controlled trial of HFOV for moderate to severe ARDS in this week’s NEJM.  (A similar RCT of HFOV, the OSCAR trial, is reported in the same issue but I limit most of my commentary to OSCILLATE because I think it’s a better and more interesting trial and more data are presented in its report.)  A major question is answered by this trial, but an important question remains open:  is HFOV an acceptable and rational option as “rescue therapy” in certain patients with “refractory” ARDS?  I remain undecided about this question, and its implications are the subject of this post.


Before I segue to the issue of the study and efficacy of rescue therapies, let’s consider some nuances of this trial:


·         Patients in both groups received high doses of sedatives (average midazolam dose for the first week: 8.3 mg/hour in the HFOV group versus 5.9 mg/hour in the control group – a 41% increase in HFOV).  Was this “too much” sedation?  What if propofol had been used instead?


·         Does HFOV confer a nocebo effect by virtue of its “unnatural” pattern of ventilation, its “requirement” for more sedation and paralysis, or the noise associated with its provision, or its influence on the perceptions of caregivers and patient’s families (recognizing that deaths after withdrawal of life support were similar in HFOV versus conventional ventilation (55 versus 49%, P=0.12)?


·         What about the high plateau pressure in the control group (32 cm H2O) despite the low tidal volume of 6.1 ml/kg PBW?  Why was not tidal volume reduced such that plateau pressure was lower than the commonly recommended target of 30 cm H2O?  Did this make a difference?  (Probably not.)


·         Why was mortality higher in the minority (12%) of control patients who were changed to HFOV (71% mortality)?  Is this related to confounding by indication or reflective of the general harmful effects of HFOV?


·         Why was there a difference between the OSCILLATE study and the OSCAR study, reported in the same issue, in terms of mortality?  Because OSCILLATE patients were sicker?  Because OSCAR control patients received higher tidal volumes, thereby curtailing the advantage of conventional ventilation?  I find this last explanation somewhat compelling.


I do not presume to know the implications of these observations or the answers to these questions, and I don’t think they undermine the main findings of the trial(s).  But they are worth thinking about.
The OSCILLATE trial asks and answers the question “should we routinely use HFOV in the treatment of moderate-to-severe ARDS?” and the answer appears to be no – sadly, we do not have a new tool in the shed for the treatment of garden variety ARDS.  But most clinicians are satisfied to treat the majority of cases of ARDS with conventional mechanical ventilation.  They consider something like ECMO or HFOV only for those cases where they have fallen out of their comfort zone, usually because of persistent (“refractory” is another term that has been used) hypoxemia in spite of FiO2 of 100% and high levels of PEEP (>20-24 cm H2O).  The question they are confronted with in these cases is, “is it better to tolerate a PaO2 of 45 and SaO2 of 78% for several hours or days (this has been called “permissive hypoxemia” but that is sometimes a misnomer – nobody is permitting it, they just can’t stop it) or is it better to try a non-standard therapy with uncertain efficacy (or perhaps net harm) in order to treat the low oxygen numbers?”  This question is not answered by the Ferguson data, nor was it intended to be.
To answer the question “is HFOV (or ECMO or any other “rescue therapy”) beneficial when limited to those patients deemed to be failing usual therapy?” is much more difficult.  There are at least two approaches that could be taken, and both are problematic.  Firstly, and this would be the most popular approach, we could design a trial into which we enroll only patients deemed to be failing usual therapy – the kind of patients for whom clinicians will think rescue therapy is a compelling option.  This is problematic because it is difficult to get consensus on just what constitutes failing usual therapy, and because by limiting enrollment to this select group it becomes very difficult to recruit adequate numbers of patients.  Nonetheless, we could, in the name of scientific reproducibility, cook up a set of “failing usual therapy” criteria, and attempt to enroll enough patients.
But, maybe we wouldn’t need to enroll that many patients.  The term “rescue therapy" seems to imply that there is something heroic that we can do that will dramatically impact the course of the illness.  Presumably we’re not looking to reduce mortality from 90% to 87% or even 80%, even though every bit counts.  Rescue connotes big effects.  So, even though I have been a harsh critic of inflated effect sizes in power calculations, rescue therapies may be one instance where looking for a mortality benefit of, say 20-25% might be reasonable.  If we looked for a difference of this size with a baseline mortality of 70% (similar to the OSCILLATE crossover mortality rate) with 80% power, about 70 patients would be needed in each group.  (Another way to increase power is to use composite endpoints, which we will see discussed in a forthcoming letter to the editor of AJRCCM.  More on that in a later post.)
This method of setting the definition of “failing usual therapy” carries the implicit assumption that investigators can divine the characteristic features of a clinical case that lead clinicians to act in a certain way – to choose rescue therapy, or to insert a Swan-Ganz catheter (SGC), or pursue any other course.  (In observational studies the associated problem is confounding by indication, whereby the sickest patients are more likely to get the therapy.  Scores of papers are written about how to control for this with propensity scores and other methods.)  I have always been skeptical, and believe that there are nuances and subtle cues in the care of individual patients that are impossible to capture with an a priori definition.  To get around this, we could design a moratorium trial, which would answer the practical question:  “should the use of HFOV be proscribed for rescue therapy?”  That is, is the world a better place if we have the option of rescuing with HFOV, or would we be better off having an HFOV moratorium?   Instead of trying to divine which patients clinicians will want to rescue with HFOV, we could simply get them to agree to allow the patient to be randomized after the decision was made to use rescue therapy.  Randomization would be to the rescue group or the moratorium group in which rescue is proscribed.  In this way, we focus the trial on exactly those patients that clinicians believe are worthy of desperation or rescue therapy.
(An interesting aside here:  what I’m suggesting is to let clinicians select patients for enrollment by gestalt, and then randomize.  And indeed we already do this when we use intubation as an inclusion criterion.  We do not have criteria for intubation.  We accept the decision process that has already occurred and make the result of the decision a criterion for study inclusion as in OSCILLATE, OSCAR, and most trials of ARDS.)
Easier said than done you say.  How will we get a clinician to acquiesce to randomization to the moratorium group after s/he has already made up his/her mind that rescue is necessary?  That is a problem, but perhaps not an insurmountable one with committed investigators who get “buy-in” in their clinical divisions.  And the problem is not absent from the first approach.  If the definition of patients failing usual therapy is a successful one, in that it predicts the patients whom clinicians will want to rescue, the same problem will affect crossover tendencies in that design.

(Another aside:  Note that a moratorium study changes the refrence frame in which results are considered.  If we conduct a study of the SGC looking for a mortality benefit but don't find one, the conclusion is that the SGC failed to improve mortality with the corollary that it should not be used.  If we conduct a moratorium study of the SGC, in which those deemed to need an SGC are randomized to SGC or moratorium, and no difference is found, the conclusion is that a moratorium on SGCs does not affect mortality with the corollary that ongoing use is not harmful.)
If we can’t get clinicians to forego rescue therapies in certain cases, does that mean there is no equipoise?  And if there is no equipoise about the use of rescue therapies in desperate cases, do they even merit study?  Is not equipoise a prerequisite for investigation?  If we conduct the study without equipoise, will the results, if they show failure of rescue, be convincing to clinicians such that they change behavior based on them?  If not, why bother doing the study?  Finally, all this must be considered in the context of how in/frequently rescue therapies are being used.  If it is going to be difficult to recruit even 150 patients to a rescue trial, is the effort even justified?  Maybe the question is more important in cases such as ECMO which are much more labor and resource intensive than HFOV or SGCs.
This much at least is now clear:  routine use of HFOV is not of benefit and is probably harmful in ARDS.  Whether it is better to tolerate hypoxemia or use HFOV or ECMO or prone positioning in an attempt to improve oxygenation in refractory cases remains an open question.  The study of “rescue therapies” poses significant problems in terms of patient recruitment and clinician equipoise.  Without the former rescue therapies cannot be studied and without the latter perhaps they should not be studied.
Posted by Scott K. Aberegg, M.D., M.P.H. at 4:05 PM