Early Mobility in the ICU: The Trial That Should Not Be 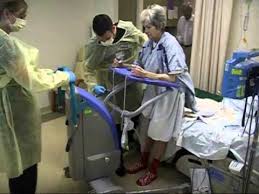 I learned via twitter yesterday that momentum is building to conduct a trial of early mobility in critically ill patients.  While I greatly respect many of the investigators headed down this path, forthwith I will tell you why this trial should not be done, based on principles of rational decision making.

The first reason that we should not do a trial of early mobility (or any mobility) in the ICU is because in the opinion of this author, experts in critical care, and many others, early mobility works.  We have a strong prior probability that this is a beneficial thing to be doing (which is why prominent centers have been doing it for years, sans RCT evidence).  When the prior probability is high enough, additional testing has decreasing yield and risks false negative results if people are not attuned to the prior.  Here's my analogy - a 35 year old woman with polycystic kidney disease who is taking birth control presents to the ED after collapsing with syncope.  She had shortness of breath and chest pain for 12 hours prior to syncope.  Her chest x-ray is clear and bedside ultrasound shows a dilated right ventricle.  The prior probability of pulmonary embolism is high enough that we don't really need further testing, we give anticoagulants right away.  Even if a V/Q scan (creatnine precludes CT) is "low probability" for pulmonary embolism, we still think she has it because the prior probability is so high.  Indeed, the prior probability is so high that we're willing to make decisions without further testing, hence we gave heparin.  This process follows the very rational Threshold Approach to Decision Making approach proposed by Pauker and Kasirrer in the NEJM in 1980, which is basically a reformulation of VonNeumann and Morganstern's Expected Utility Theory to adapt it to medical decisions.  Distilled it states in essence, "when you get to a threshold probability of disease where the benefits of treatment exceed the risks, you treat."  And so let it be with early mobility.  We already think the benefits exceed the risks, which is why we're doing it.  We don't need a RCT.  As I used to ask the housestaff over and over until I was cyanotic: "How will the results of that test influence what you're going to do?"

Notice that this logical approach to clinical decision making shines a blinding light upon "evidence based medicine" and the entire enterprise of testing hypotheses with frequentist methods that are deaf to prior probabilities.  Can you imagine using V/Q scanning to test for PE without prior probabilities?  Can you imagine what a mess you would find yourself in with regard to false negatives and false positives?  You would be the neophyte medical student who thinks "test positive, disease present; test negative, disease absent."  So why do we continue ad nauseum in critical care medicine to dismiss prior probabilities and decision thresholds and blindly test hypotheses in a purist vacuum?

The next reasons this trial should not be conducted flow from the first.  The trial will not have a high enough likelihood ratio to sway the high prior below the decision threshold; if the trial is "positive" we will have spent millions of dollars to "prove" something we already knew at a threshold above our treatment threshold; if the trial is positive, some will squawk "It wasn't blinded" yada yada yada in an attempt to dismiss the results as false positives; if the trial is negative, some will, like the tyro medical student, declare that "there is no evidence for early mobility" and similar hoopla and poppycock; or the worst case:  the trial shows harm from early mobility, which will get the naysayers of early mobility very agitated.  But of course, our prior probability that early mobility is harmful is hopelessly low, making such a result highly likely to be spurious.  When we clamor about "evidence" we are in essence clamoring about "testing hypotheses with RCTs" and eschewing our responsibility to use clinical judgment, recognize the limits of testing, and practice in the face of uncertainty using our "untested" prior probabilities.

Consider a trial of exercise on cardiovascular outcomes in community dwelling adults - what good can possibly come of such a trial?  Don't we already know that exercise is good for you?  If so, a positive trial reinforces what we already know (but does little to convince sedentary folks to exercise, as they too already know they should exercise), but a negative trial risks sending the message to people that exercise is of no use to you, or that the number needed to treat is too small for you to worry about.

Or consider the recent trials of EGDT which "refuted" the Rivers trial from 14 years ago.  Now, everybody is saying, "Well, we know it works, maybe not the catheters and the ScVO2 and all those minutaie , but in general, rapid early resuscitation works.  And the trials show that we've already incorporated what works into general practice!"

I don't know the solutions to these difficult quandries that we repeatedly find ourselves in trial after trial in critical care medicine.  I'm confused too.  That's why I'm thinking very hard and very critically about the limits of our methods and our models and our routines.  But if we can anticipate not only the results of the trials, but also the community reaction to them, then we have guidance about how to proceed in the future.  Because what value does a mega-trial have, if not to guide care after its completion?  And even if that is not its goal, (maybe its goal is just to inform the science), can we turn a blind eye to the fact that it will guide practice after its completion, even if that guidance is premature?

It is my worry that, given the high prior probability that a trial in critical care medicine will be "negative", the most likely result is a negative trial which will embolden those who wish to dismiss the probable benefits of early mobility and give them an excuse to not do it.

Diagnostic tests have risks.  A false negative test is one such risk.
Posted by Scott K. Aberegg, M.D., M.P.H. at 1:28 PM