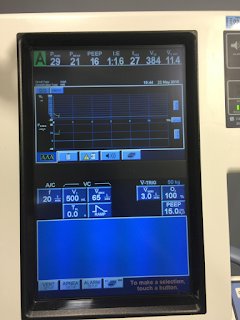 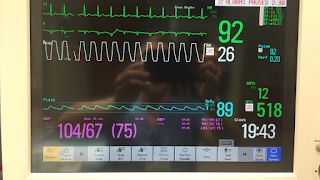 It is only fair to follow up my provocative post about a “trial of extubation” by chronicling a case or two that didn’t go as I had hoped.  Reader comments from the prior post described very low re-intubation rates.  As I alluded in that post, decisions regarding extubation represent the classic trade-off between sensitivity and specificity.  If your test for “can breathe spontaneously” has high specificity, you will almost never re-intubate a patient.  But unless the criteria used have correspondingly high sensitivity, patients who can breathe spontaneously will be left on the vent for an extra day or two.  Which you (and your patients) favor, high sensitivity or high specificity (assuming you can’t have both) depends upon the values you ascribe to the various outcomes.  Though these are many, it really comes down to this:  what do you think is worse (or more fearsome), prolonged mechanical ventilation, or reintubation?

What we fear today we may not seem so fearsome in the future.  Surgeons classically struggled with the sensitivity and specificity trade-off in the decision to operate for suspected appendicitis.  “If you never have a negative laparotomy, you’re not operating enough” was the heuristic.  But this was based on the notion that failure to operate on a true appendicitis would lead to serious untoward outcomes.  More recent data suggest that this may not be so, and many of those inflamed appendices could have been treated with antibiotics in lieu of surgery.  This is what I’m suggesting with reintubation.  I don’t think the Epstein odds ratio (~4) of mortality for reintubation from 1996 applies today, at least not in my practice.


Finally, there is the prickly issue of prior probability.  If you treat a population of patients with a high prior probability of successful extubation (perhaps a lower acuity and average time on the ventilator are correlates of this), you will get away with “reckless extubations” more frequently than somebody in a tertiary care center where patients have a higher acuity and longer time on the ventilator.  The prior probability may in part be determined by a self-fulfilling prophesy of sorts – perhaps the quicker you get patients off the vent, the higher your prior goes because you are effectively reducing the burden of illness in that ICU.  As I’m considering returning to academic tertiary care, I have been very careful to consider that I may have to recalibrate my approach to the different patient cohort I will treat there.  The opposite is also true:  I get the feeling that people who trained in University settings and go to private practice treat the community cohort according to the epidemiology they learned in training at the University – a boiler plate approach that will surely increase time on ventilator and testing in the community patients if they are an entirely different cohort in terms of acuity of illness.

A few months ago, I assumed the care of a 40-something woman with ARDS from severe aspiration pneumonia from dextromethorphan overdose.  Following my usual approach, I diuresed her with abandon, reduced sedation and ventilator settings and a day or two later she was awake but not following commands with very marginal performance on an FiO2 of 50-60%, PEEP 8-10 – that is, she was breathing in the 30s with these settings and PS in the range of 5-8.  Each day she would awaken but we could not get her to follow commands.  My thinking was “this could take several more days for her to regain lucidity and follow commands, and I think I can support her oxygenation with supplemental ambient pressure oxygen or high flow nasal cannula (HFNC).  We extubated her and, over the next hour or so, sans tube, she regained some lucidity and her respiratory status was adequate.  (This is a frequent observation – agitation or failure to follow commands during an SBT can be due to either difficulty breathing or the mere presence of the tube, and for the life of me I can’t discriminate between them with the tube in place.)  Then, a few hours later she had respiratory deterioration and I had to emergently reintubate her.  The very next day, she performed even better on the SBT and I faced the harrowing decision:  Once bitten, twice shy, they say.  I figured if I extubated her two days in a row and she failed, I would look like a reckless dreg.  Nonetheless, we extubated her and she did wonderfully and was soon discharged from the ICU.

More recently, I admitted another patient with opioid overdose but who aspirated during intubation in the ED.  He had the ventilator settings and monitor findings in the photos accompanying this post.  In his case, I thought the original decision to intubate him had been rash, that he could have been supported with supplemental oxygen and narcan.  The material he had aspirated constituted very large chunks of undigested gastric contents and it would not suction through the inline suction catheter.  When we turned off the propofol, we was fully awake and following commands and responding to jokes.  I reasoned that, in spite of the high level of support, I could probably support him on HFNC and that he may be able to clear his airway better naturally than we could with the rinky-dink suction catheter.  We extubated him.  His respiratory status was very marginal, with saturations varying between the high to low 80s.  Nonetheless, I assisted the nurses to get him to the bedside commode and worked with him to clear his airway.   I was in the room for almost 2 hours directly observing him and trying, through trial and error to find a way to support his oxygenation at an acceptable level.  Alas, I had to go do an admission at another hospital and decided it imprudent to leave him in such a marginal condition so I reintubated him.  Him, also, I extubated the next day, after mulling over “how it would look” if he failed for a good bit of time.

I relate the two trial of extubation failures of 2016 not only for the sake of fairness, but also to highlight my methods.  I do not do this recklessly and mindlessly.  In each case I carefully think through all the nuances and particularities of the individual patient and the possible outcomes of each decisional path as well as how I will respond to each possible outcome.  Most important, I personally observe these patients for up to several hours after extubation to assure myself that they will “fly” else I reintubate them.  I do not doubt that in a busier setting, I would not have the luxury of time for this approach.

A reasonable person might opine that, since each person was successfully extubated the next day that what I did constituted a useless risk and a waste of time.  I certainly would not want even a substantial minority of patients to have to endure two extubations rather than one.  But another possibility is that my strategy has pushed the limits just enough as that in the cases where a “trial of extubation” fails, it was a very close call indeed, so naturally they were successfully extubated the next day – they just needed a tad bit more time, I pushed it just a tad bit too far.  One great advantage of this approach is that there are fewer unknown counterfactuals – I see how well I’m calibrated.  If you have few reintubations, you may falsely conclude that you are calibrated because the patients who could be liberated but are not are unknown to you.

The risk adverse will find this approach totally unpalatable, and I do not encourage anybody to follow it against their better judgment.  I only would reinforce the notion that we work in a risky profession and that often what we intuitively appraise as “risky” may have more to do with how we have been conditioned in training that with an accurate estimate of the risk.  Everything has risk, and we have to work to mitigate overall risk.  Our mitigation strategies will depend largely on the values we assign to the various risks.
Posted by Scott K. Aberegg, M.D., M.P.H. at 2:34 PM