In the last post, I linked a video podcast of my explaining non-inferiority trials and their inherent biases.  In this videocast, I revisit noninferiority trials and the use of one-sided confidence intervals.  I review the Salminen et al noninferiority trial of antibiotics versus appendectomy for the treatment of acute appendicitis in adults.  This trial uses a very large delta of 24%.  The criteria for non-inferiority were not met even with this promiscuous delta.  But the use of a 1-sided 95% confidence interval concealed a more damning revelation in the data.  Watch the 13 minute videocast to learn what was hidden in plain sight!

Also, at 7:29, I struggle to remember the numbers (woe is my memory!) and I place the point estimate of the difference, 0.27, to the right of the delta dashed line at .24.  This was a mistake which I correct a few minutes later at 10:44 in the video.  Do not let it confuse you, the 0.27 point estimates were just drawn slightly to the right of delta and they should have been marked slightly to the left of it.  I would re-record the video (labor intensive) or edit it, but I'm a novice with this technological stuff, so please do forgive me.

Again, I apologize for these gaffes.  My struggle (and I think about this stuff a lot) in speaking about and accurately describing these confidence intervals and the conclusions that derive from them result from the arbitrariness of the CONSORT "rules" about interpretation and the arbitrariness of the valences (some articles use negative valence for differences favoring "new" some journals use positive values to favor "new").  If I struggle with it, many other readers, I'm sure, also struggle in keeping things straight.  This is fodder for the argument that these "rules" ought to be changed and made more uniform, for equity and ease of understanding and interpretation of non-inferiority trials.

It made me feel better to see this diagram in Annals of Internal Medicine (Perkins et al July 3, 2012, online ACLS training) where they incorrectly place the point estimate at slightly less than -6% (to the left of the dashed delta line in the Figure 2), when it should have been placed slightly greater than -6% (to the right of the dashed delta line).  Clicking on the image will enlarge it. 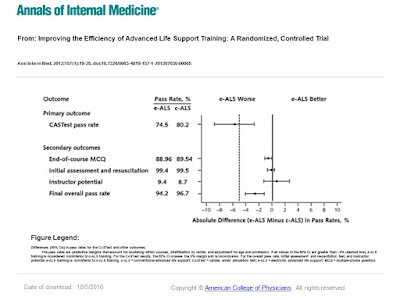