Don't Get Soaked: The Practical Utility of Predicting Fluid Responsiveness 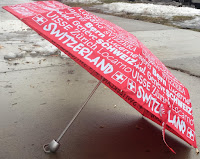 In this article in the September 27th issue of JAMA, the authors discuss the rationale and evidence for predicting fluid responsiveness in hemodynamically unstable patients.  While this is a popular academic topic, its practical importance is not as clear.  Some things, such as predicting performance on a SBT with a Yang-Tobin f/Vt,  don't make much sense - just do the SBT if that's the result you're really interested in.  The prediction of whether it will rain today is not very important if the difference in what I do is as small as tucking an umbrella into my bag or not.  Neither the inconvenience of getting a little wet walking from the parking garage nor that of carrying the umbrella is very great.  Similarly, a prediction of whether or not it will rain two months from now when I'm planning a trip to Cancun is not very valuable to me because the confidence intervals about the estimate are too wide to rely upon.  Better to just stick with the base rates:  how much rainfall is there in March in the Caribbean on an average year?

Our letter to the editor was not published in JAMA, so I will post it here:

Second, in the examples that discuss NPV, the authors use a prior probability of fluid responsiveness of 50%.  A clinician who appropriately uses a threshold approach to decision making3 must determine a probability threshold above which treatment is warranted, considering the net utility of all possible outcomes with and without treatment given that treatment’s risks and benefits4.  Because the risk of fluid administration in judicious quantities is low5, the threshold for fluid administration is correspondingly low and fluid bolus may be warranted based on prior probability alone, thus obviating additional testing.  Even if additional testing is negative and suggests a posterior probability of fluid responsiveness of only 10% (with an upper 95% confidence limit of 18%), many clinicians would still judge a trial of fluids to be justified because fluids are considered to be largely benign and untreated hypovolemia is not4.  (The upper confidence limit will be higher still if the prior probability was underestimated.)  Finally, the posterior probabilities hinge critically on the estimates of prior probabilities, which are notoriously nebulous and subjective.  Clinicians are likely intuitively aware of these quandaries, which may explain why empiric fluid bolus is favored over passive leg raise testing outside of academic treatises6.