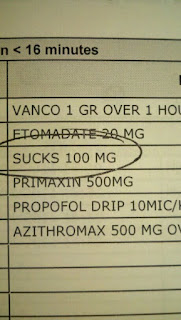 The editorial about the PreVent trial in the NEJM a few months back is entitled "Preventing Dogma from Driving Practice".  If we are not careful, we will let the newest dogma replace the old dogma and become practice.

The PreVent trial compared bagging versus no bagging after induction of anesthesia for rapid sequence intubation (RSI).  Careful readers of this and another recent trial testing the dogma of videolaryngoscopy will notice several things that may significantly limit the external validity of the results.

I don't think these trials are directly relevant to my practice.  Like surgeon Robert Liston who operated in the pre-anesthesia era and learned that speed matters (he could amputate a leg in 2.5 minutes), I have learned that the shorter the time from induction to intubation, the better - it is a vulnerable time and badness occurs during it:  atelectasis, hypoxemia, aspiration, hypotension, secretion accumulation, etc.

One reason the intubations are taking so long in the studies, I surmise, is this:  First, there is a presupposition that the paralytic agent must have taken (full) effect before the attempt is made;  second, the reason this is presupposed is because when you use etomidate, it is true!  Because etomidate succs - it does not achieve a deep enough anesthesia as does sodium thiopental (no longer used much) or propofol, or ketafol (a 1:1 mixture of ketamine and propofol).  If a more potent induction agent were administered and a perspicacious intubater observed carefully, s/he would realize that intubation can very often be performed before paralysis takes full effect, or even without paralysis.

Now I will face the accusations that this is a howler, that the hemodynamic effects (manageable in most patients) of these more potent agents make them less desirable.  Criticisms will also come from those who (over?) emphasize similarly limited studies showing a marginal increase in first pass success rates with paralysis.  And those points are valid and deserve emphasis.  I contend only that speed matters and I disagree that we have found the right balance of all the desiderata.  Etomidate is partly to blame for that, because with Etomidate you often need paralysis.  With other agents - not so much.

Finally, the effect of the trainees may compound the issue of speed that is introduced (in my speculation) by etomidate.

It is my wager that if the intubation times were reduced to 30-60 seconds, as they easily could be in my experience with all operators, trainees included, you would not have seen the difference in the proportions of patients with severe desaturations observed in the PreVent trial.

Dispensing with dogma is great.  We just don't want to replace it with more dogma.  To avoid that, we need to pay careful attention to the background conditions of the evidence we tout as showing us the way forward.
Posted by Scott K. Aberegg, M.D., M.P.H. at 1:22 PM