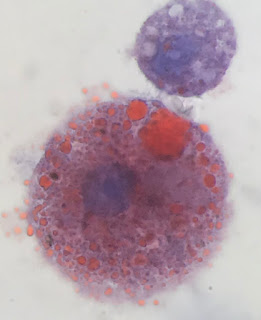 It's time to weigh in on an ongoing debate being waged in the correspondence pages of the NEJM.  To wit, what is the significance of lipid laden macrophages (LLMs) in VALI?  As we stated, quite clearly, in our original research letter,

There, we outlined the two questions about their significance:  1.) any relation to the pathogenesis of the syndrome; and 2.) whether, after characterizing their sensitivity and specificity, they can be used in diagnosis.  I am not a lung biologist, so I will ignore the first question and focus on the second, where I actually do know a thing or two.

We still do not know the sensitivity or specificity of LLMs for VALI, but we can make some wagers based on what we do know.  First, regarding sensitivity.  In our ongoing registry at the University of Utah, we have over 30 patients with "confirmed" VALI (if you dont' have a gold standard, how do you "confirm" anything?), and to date all but one patient had LLMs in excess of 20% on BAL.  For the first several months we bronched everybody.  So, in terms of BAL and LLMs, I'm guessing we have the most extensive and consistent experience.  Our sensitivity therefore is over 95%.  In the Layden et al WI/IL series in NEJM, there were 7 BAL samples and all 7 had "lipid Layden macrophages" (that was a pun).  In another Utah series, Blagev et al reported that 8 of 9 samples tested showed LLMs.  Combining those data (ours are not yet published, but soon will be) we can state the following:  "Given the presence of VALI, the probability of LLM on Oil Red O staining (OROS) is 96%."  You may recognize that as a statement of sensitivity.  It is unusual to not find LLMs on OROS of BAL fluid in cases of VALI, and because of that, their absence makes the case atypical, just as does the absence of THC vaping.  Some may go so far as to say their absence calls into question the diagnosis, and I am among them.  But don't read between the lines.  I did not say that bronchoscopy is indicated to look for them.  I simply said that their absence makes the case atypical and calls it into question.

Their specificity is another issue altogether.  As Dr. Larsen and colleagues have taken great pains to point out (here and here), LLMs are present in a bevy of diseases such as "infection, aspiration, drug reactions, and autoimmune disorders, often in high numbers."  A bigger worry is not mentioned: that they may be a marker of vaping and are present in asymptomatic vapers without VALI.  If this is true they tell you what you (should) already know, namely that a person is vaping.  (However, we recently saw the second of two types of vapers - the type who doesn't admit it - and VALI was only suspected when her bronch showed LLMs.  Pressed, she finally admitted to vaping.)

Because of these uncertainties, we do not know the specificity of LLMs for VALI.  That is, we don't know "the probability of absence LLMs given the absence of VALI."  But let's be careful of jumping to unwarranted conclusions, as Larsen et al do when they state "We do not recommend performing lipid stains on BAL fluid or lung tissue from adult patients, and they should not be relied on to distinguish vaping-associated lung injury from other causes of acute lung injury."  They are being far too puritanical here, for two reasons.

First, a test need not have high specificity to be useful.  Take ESR for example, which is also, in my opinion, a very useful marker of VALI.  Even when very high (>100), ESR has many causes:  endocarditis, osteomyelitis, SLE, GCA, PMR, MM, WM, malignancy, the list goes not.  But for the most part, patients suspected of having VALI pretty obviously don't have those things!  If you exclude the other things that can cause elevation of ESR, it gets increasingly specific for VALI!  The same is true with any test.  If you exclude people with sepsis, COPD, PE etc. from troponin testing, it looks pretty specific. When you run around ordering troponin on every Tom, Dick, and Harry in the MICU, not so much.  So when Larsen et al impugn LLMs because, as they show in their figure, they are present in infliximab pulmonary injury, I say, "yeah, but my vapers aren't taking infliximab!"  Nor are they aspirating, infected, etc.  Their reference 4 showing LLMs are present in a host of other diseases such as interstitial fibrosis and HIV and many others is also curious, because on average, the positivity rate was only 10-25% in these disorders, which of course we're not considering in most VALI patients.  Furthermore, that reference shows LLMs were present in only 2.5% of controls.  The big question is, are they present in asymptomatic vapers?  None of their references answers the specificity question.  Reference 5 is a great summary of the whole topic, but does not illuminate the pivotal question.  It is simply unknown whether LLMs, measured in this way or that, with this cutoff or that, have a good positive or negative likelihood ratio for VALI.

Which is a great segue to the second reason I think some are pathologizing LLMs unnecessarily and excessively - viz, when your sensitivity is 96%, you don't need a lot of specificity to have a useful test.  Tests are useless when they follow the "rule of 100" and the sensitivity and specificity sum to approximately 100 - when this happens the positive and negative likelihood ratios are approximately 1, and useless.  But LLMs, if you accept a sensitivity of 96%, can still be a useful test if their specificity is at or above just 20%.  See for yourself using the calculator at Status Iatrogenicus.  If you start with a prior probability of 50% - you're on the fence - and the sensitivity of LLMs is 96% but the specificity is just 20%, the posterior probability of VALI given no LLMs is just 17%.  It is not excluded but its probability is significantly diminished, and approaching the exclusion threshold.  If that patient also has a normal ESR and no detectable THC on drug testing, the cumulative result rules out the disease.  With a 50% prior, the range where diagnostic testing is most useful, and the specificity is just 50%, meaning its a coin toss whether LLMs are present in the absence of VALI, the posterior probability of VALI is reduced to 7%.  In that case, you could reasonably say VALI is excluded by the test alone, in spite of its poor specificity.

It's pretty easy to exclaim "they're nonspecific!", even though it may be true.  It is much harder, with careful analysis, to make a justified claim that LLMs are useless at this stage.  Based upon what we know at this date, LLMs are highly sensitive for VALI, and their absence is evidence against the diagnosis, even if their specificity is as low as 20%.  The true disappointment is that dogmatism is encouraging a premature dismissal of their utility as one datum among many that can help distinguish this syndrome from others.  When Larsen et al say dramatic things such as


"positive lipid stains may lead to misdiagnosis, and clinicians who ignore this inconvenient fact do so at the potential peril of their patients... To date, there are no known specific pathologic features of this condition, and its diagnosis requires clinical correlation."

we should ask our own questions.  Has misdiagnosis (specifically overdiagnosis) been a problem with VALI?  What perils have befallen patients whose clinicians have ignored these "inconvenient facts"?  Who are the clinicians who are blindly diagnosing this disease without clinical correlation?  What patients have had a bronchoscopy for a different condition, and been misdiagnosed with VALI on the basis of a positive OROS for LLMs?  Where is the evidence of a spate of unnecessary bronchoscopies looking for LLMs to diagnose VALI?

The fact is, we don't know the sensitivity and specificity of LLMs for VALI.  But we have good reason to suspect the sensitivity is high, and if it is, it can still be a useful test unless the specificity is abysmally low (which it may be).  The jury is out.  Meanwhile, good judgment, incessantly advocated for on this blog and its sister blog Status Iatrogenicus, remains a cornerstone of the diagnosis of VALI.
Posted by Scott K. Aberegg, M.D., M.P.H. at 12:45 AM