I stumbled upon a very disturbing report on NBC News today of a physician couple in Wisconsin accused of abusing their adopted infant daughter.  It is surreal and horrifying and worth a read - not because these physicians abused their daughter, but because they almost assuredly did not.  One driving force behind the case appears to be a well-meaning and perfervid, if misguided and perfidious, pediatrician at University of Wisconsin who, with her group, coined the term "sentinel injuries" (SI) to describe small injuries such as bruises and oral injuries that they posit portend future larger scale abuse.  It was the finding of SI on the adopted infant in the story that in part led to charges of abuse against the father, Dr. Cox, got his child put in protective services, got him arrested, and threatens his career.  Interested readers can reference the link above for sordid and sundry details of the case.

Before delving into the 2013 study in Pediatrics upon which many contentions about SI rest, we should start with the fundamentals.  First, is it plausible that the thesis is correct, that before serious abuse, minor abuse is detectable by small bruises or oral injuries?  Of course it is, and it sounds like a good narrative.  But being a good plausible narrative does not make it true and it is likewise possible that bruises seen in kids who are and are not abused reflect nothing more than accidental injuries from rolling off a support, something falling or dropping on them, somebody dropping them, a sibling jabbing at them with a toy, and a number of things.  To my knowledge, the authors offer no direct evidence that the SIs they or others report have been directly traced to abuse.  They are doing nothing more than inferring that facial bruising is a precursor to Abusive Head Trauma (AHT), and based on their bibliography they have gone out of their way to promote this notion.

The 2013 article in Pediatrics by Sheets et al reports a case-control study with the usual caveats of an observational study, viz risk of ascertainment and misclassification biases.  However it is very difficult to understand what they actually did because their methodology is woefully inadequate. There are "4 nonconcurrent cohorts" of 100 patients reported and analyzed.  All had had a Child Protection Team (CPT) consult in order to enter into the cohort (so the cohort is enriched with abuse).  The authors do not mention what prompted those consultations, but we can infer that there was some suspicion of abuse. They classify the 4 cohorts into definite abuse based on AHT, definite abuse not AHT-related, intermediate level concern, and no-abuse (control).  These determinations were made by consensus of two author teams. The most glaring deficiency is how SIs were determined or ruled out - what counts as an SI? 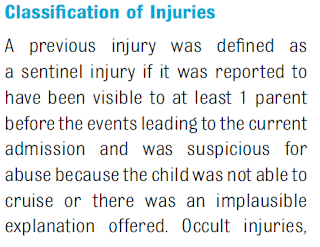 What is an "implausible explanation"?  Where are some examples of both plausible and implausible explanations?  None are given in the article.  We are to take the authors on faith.  So, it is not a mark on a child that is the portent of abuse, it is the CPT's interpretation of that mark that heralds future abuse.  If that is the case, we really really need some good definitions here to know exactly how they're determining something is an SI, especially since in the NBC article, NP Ventura mistakenly attributes to SIs some birthmarks and then the CPT members claim that they're better than dermatologists at examining the skin. 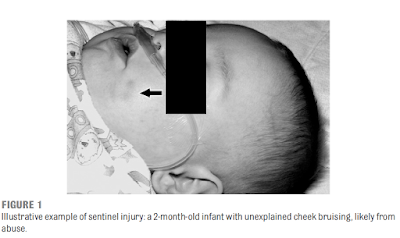 All 100 "control" children also had injuries (bruises?  buccal injuries? what?) determined to not represent SIs, with most classified as accidents. 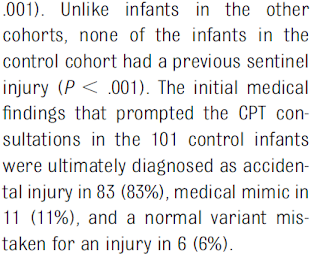 Why are these not sentinel events for future abuse?  Because the authors divined that they were legitimate injuries or had plausible explanations according to the definition above. Is it possible that SIs documented in the other cohorts (you know the ones that did predict future abuse) were also "accidental injuries", "medical mimics", and "mistakes"?  How, exactly, was this sorted out?  It appears that SIs were ascertained after the fact, but it is hard to be certain because the manuscript is methodologically bereft.  While the authors, probably at the behest of a perspicacious reviewer, have a section on "circular reasoning" ("it's abuse because I say its abuse"), it is concerned with the classification of abuse, not the classifications of SI - both are equally important for the premises of the authors' SI arguments.

Supposing we take this all at face value though, and try to apply SIs as a diagnostic sign of future abuse (predicting the future being an inherently fraught endeavor.)  I am loath to do that, but we have to in order to bring this full circle.  Suppose the that diagnostic positive likelihood ratio for a SI predicting abuse is 10 (which would be really really high for a physical sign).  Go to the www.statusiatrogenicus.com Clinician's Bayesian Calculator, and using decimals put in prior probability 1% sensitivity and specificity of 90% and a population size of 1000 and see what happens:  the positive predictive value is 8%.  Using SIs, you have mislabeled 99 innocent parents as abusers  That is the crux of the problem here.  Sheets et al, by restricting their analysis to a cohort with suspected abuse, have pre-ordained a falsely high positive predictive value rate.  (They don't give ample data to construct 2x2 tables, but their sample contains mostly abused kids and this will falsely inflate the positive predictive values.)  Anybody who goes around wantonly applying this suspect paradigm of SI in kiddos with a very low probability of true abuse, as all indicators suggest Dr. Cox's family represents, is engaging in a dangerous, arbitrary, and reckless campaign.

In retrospect the NBC story is more predictable than child abuse.  Take a poorly considered paradigm rife with bias, crumby data, lack of understanding of basic epidemiology and medical decision making, and mix in some zealotry and fanaticism crusading under the banner of child welfare, and it is no wonder that a toxic and pernicious pall has set upon Madison with the Wisconsin Witch Hunts.
Posted by Scott K. Aberegg, M.D., M.P.H. at 7:32 PM