Common Things Are Common, But What is Common? Operationalizing The Axiom

"Prevalence [sic: incidence] is to the diagnostic process as gravity is to the solar system: it has the power of a physical law." - Clifton K Meador, A Little Book of Doctors' Rules

We recently published a paper with the same title as this blog post here. The intent was to operationalize the age-old "common things are common" axiom so that it is practicable to employ it during the differential diagnosis process to incorporate probability information into DDx. This is possible now in a way that it never has been before because there are now troves of epidemiological data that can be used to bring quantitative (e.g., 25 cases/100,000 person-years) rather than mere qualitative (e.g., very common, uncommon, rare, etc) information to bear on the differential diagnosis. I will briefly summarize the main points of the paper and demonstrate how it can be applied to real-world diagnostic decision making.

First is that the proper metric for "commonness" is disease incidence (standardized as cases/100,000 person-years) not disease prevalence. Incidence is the number of new cases per year - those that have not been previously diagnosed - whereas prevalence is the number of already diagnosed cases. It the disease is already present, there is no diagnosis to be made (see article for more discussion of this). Prevalence is approximately equal the product of incidence & disease duration, so it will be higher (oftentimes a lot higher) than incidence for diseases with a chronic component; this will lead to overestimation of the likelihood of diagnosing a new case. Furthermore, your intuitions about disease commonness are mostly based on how frequently you see patients with the disease (e.g., SLE) but most of these are prevalent not incident cases so you will think SLE is more common than it really is, diagnostically. If any of this seems counterintuitive, see our paper for details (email me for pdf copy if you can't access it).

Second is that commonness exists on a continuum spanning 5 or more orders of magnitude, so it is unwise to dichotomize diseases as common or rare as information is lost in doing so. If you need a rule of thumb though, it is this: if the disease you are considering has single-digit (or less) incidence in 100,000 p-y, that disease is unlikely to be the diagnosis out of the gate (before ruling out more common diseases). Consider that you have approximately a 15% chance of ever personally diagnosing a pheochromocytoma (incidence <1/100,000 P-Y) during an entire 40 year career as there are only 2000 cases diagnosed per year in the USA, and nearly one million physicians in a position to initially diagnose them. (Note also that if you're rounding with a team of 10 physicians, and a pheo gets diagnosed, you can't each count this is an incident diagnosis of pheo. If it's a team effort, you each diagnosed 1/10th of a pheochromocytoma. This is why "personally diagnosing" is emphasized above.)  A variant of the common things axiom states "uncommon presentations of common diseases are more common than common presentations of uncommon diseases" - for more on that, see this excellent paper about the range of presentations of common diseases.

Third is that you cannot take a raw incidence figure and use it as a pre-test probability of disease. The incidence in the general population does not represent the incidence of diseases presenting to the clinic or the emergency department. What you can do however, is take what you do know about patients presenting with a clinical scenario,  and about general population incidence, and make an inference about relative likelihoods of disease. For example, suppose a 60-year-old man presents with fever, hemoptysis and a pulmonary opacity that may be a cavity on CXR. (I'm intentionally simplifying the case so that the fastidious among you don't get bogged down in the details.) The most common cause of this presentation hands down is pneumonia. But, it could also represent GPA (formerly Wegener's, every pulmonologist's favorite diagnosis for hemoptysis) or TB (tuberculosis, every medical student's favorite diagnosis for hemoptysis). How could we use incidence data to compare the relative probabilities of these 3 diagnostic possibilities? 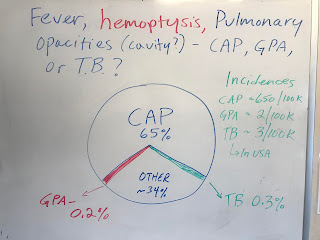 Suppose we were willing to posit that 2/3rds of the time we admit a patient with fever and opacities, it's pneumonia. Using that as a starting point, we could then do some back-of-the-envelope calculations. CAP has an incidence on the order of 650/100k P-Y; GPA and TB have incidences on the order of 2 to 3/100k PY respectively - CAP is 200-300x more common than these two zebras. (Refer to our paper for history and references about the "zebra" metaphor.)  If CAP occupies 65% of the diagnostic probability space (see image and this paper for an explication), then it stands to reason that, ceteris paribus (and things are not always ceteris paribus), the TB and GPA occupy on the order of 1/200th of 65%, or about 0.25% of the probability space. From an alternative perspective, a provider will admit 200 cases of pneumonia for every case of TB or GPA she admits - there's just more CAP out there to diagnose! Ask yourself if this passes muster - when you are admitting to the hospital for a day, how many cases of pneumonia do you admit, and when is the last time you yourself admitted and diagnosed a new case of GPA or TB? Pneumonia is more than two orders of magnitude more common than GPA and TB and, barring a selection or referral bias, there just aren't many of the latter to diagnose! If you live in a referral area of one million people, there will only be 20-30 cases of GPA diagnosed in that locale during in a year (spread amongst hospitals/clinics), whereas there will be thousands of cases of pneumonia.

As a parting shot, these are back-of-the-envelope calculations, and their several limitations are described in our paper. Nonetheless, they are grounding for understanding the inertial pull of disease frequency in diagnosis. Thus, the other day I arrived in the AM to hear that a patient was admitted with supposed TTP (thrombotic thrombocytopenic purpura) overnight. With an incidence of about 0.3 per 100,000 PY, that is an extraordinary claim - a needle in the haystack has been found! - so, without knowing anything else, I wagered that the final diagnosis would not be TTP. (Without knowing anything else about the case, I was understandably squeamish about giving long odds against it, so I wagered at even odds, a $10 stake.) Alas, the final diagnosis was vitamin B12 deficiency (with an incidence on the order of triple digits per 100k PY), with an unusual (but well recognized) presentation that mimics TTP & MAHA.

Incidence does indeed have the power of a physical law; and as Hutchison said in an address in 1928, the second  commandment of diagnosis (after "don't be too clever") is "Do not diagnose rarities." Unless of course the evidence demands it - more on that later.