Billions and Billions of People on Statins? Damn the Torpedos and Full Speed Ahead

Among the many editorials providing background and backlash about the new cholesterol guidelines is this one:  More Than a Billion People Taking Statins? by John Ioannidis, which echoes the worries of others that the result of the guidelines (which changed the 10-year risk threshold for treatment from 10% to 7.5%) may be that many more people (billions and billions?) will be prescribed statins.  But the title is a curious one - if statins are beneficial, should we lament their widespread prescription and adoption or is it just unfortunate that heart disease is so prevalent? Whose side are we on, the cure or the disease?

Are the premises of the guidelines flawed leading to flawed extrapolations, or are the premises correct and we just don't like the implications?  Let's look at the premises - because if they're flawed, we may find that other premises we have accepted are flawed.

One basic premise of the new guidelines is that the net benefit of statins is great enough to justify their use in people with a ten-year risk of cardiovascular outcomes of 7.5%.  This is  based on a relative risk reduction (RRR) of these outcomes of about 27% with statins.  But as readers of this blog know, relative risks are only useful to compare the relative value of treatments for the same condition in the same risk group and they tell us nothing about the absolute value of those treatments or their values compared to treatments for conditions with different base rates.  A person considering taking a statin to prevent a cardiovascular event is concerned about absolute reductions in that outcome from his/her baseline level of risk.  We can roughly estimate the absolute risk reduction (ARR) conferred by statins as:

So, given these assumptions, if your annual risk of cardiovascular badness is 0.75%, it should decrease by 0.20% to 0.55% with statins.  Sounds like peanuts, right?  If it does, that's because we're not accustomed to thinking about things in terms of absolute risk.  Here are some events and associated risk reduction measures for comparison: 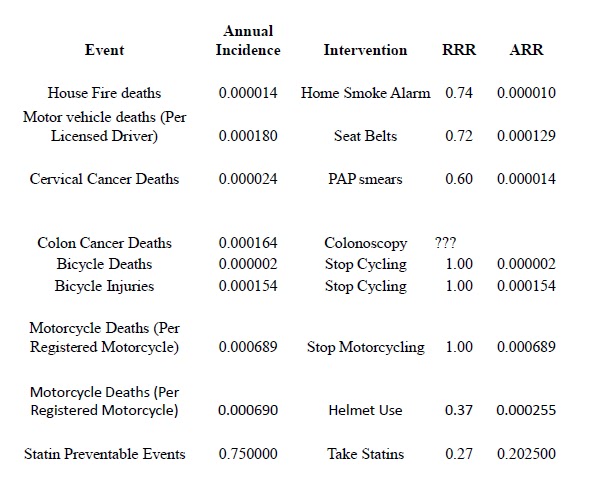 In this table, I have used the most optimistic estimates of risk reduction for some of the most widely accepted safety behaviors (e-mail me for references if you're interested) in order to demonstrate how absurd it is to marginalize statins because of their "relatively small" benefits (or costs [especially now that many are generic] or side effects [unless you have those side effects]).  All of the things that we do to ensure health and safety have, on the individual level, very small benefits.  But on the population level, these small absolute benefits add up - and they add up faster when the disease is prevalent and adoption is widespread.

There are other factors to consider here - such as the idiosyncratic values people assign to specific risks (e.g., I may seek risks for the simple thrill of them) and benefits (exercise on a bicycle versus other means) as well as alternative methods of risk reduction in these specific cases (diet and exercise) and in general (driving less).  And some people may be willing to just dismiss an annual risk reduction of 0.20% as negligible to them - fine.  (Indeed I suspect if we discussed absolute benefits of therapies with patients, we may be surprised by how many therapies that we practitioners consider efficacious are rejected by patients as being below their personal threshold for adoption.  When I tell elderly patients that their coumadin, which their primary care physician indoctrinated them into taking, reduces their annual stroke risk from 5% to 2%, many of them are bemused.)  But there is no doubt that statins are valuable - and if large numbers of people wind up taking statins, that's because cardiovascular disease is so prevalent, not because their efficacy is below the threshold that we (practitioners) customarily consider acceptable and laudable.  Indeed their efficacy is sometimes orders of magnitude greater.

(This post is dedicated to my childhood hero Carl Sagan, who claimed, in a book called Billions and Billions that he never said "billions and billions" (it's too aspecific!) but who was a huge fan of order-of-magnitude thought experiments.)
Posted by Scott K. Aberegg, M.D., M.P.H. at 7:41 PM