I got to thinking about cancer screening (again) in the last week after reading in BMJ about the Canadian National Breast Screening Study (CNBSS).  That article piqued my interest because I immediately recalled the brouhaha that ensued after the U.S. Preventative Services Task Force (USPSTF) recommended that women not get mammograms until  age 50 rather than age 40.  That uproar was similar to the outcry by urologists when the USPSTF recommended against screening for prostate cancer with PSA testing.  Meanwhile, changes in the cholesterol guidelines have incited intellectual swashbuckling among experts in that field.  Without getting into the details, observers of these events might generate the following hypotheses:

The CNBSS tracked the outcomes of almost 90,000 women 25 years after they entered a study that compared annual breast examinations to annual examinations and mammography.  (It is important to note that the study did NOT compare mammography to nothing.)  The analysis of the prolonged follow-up shows the same thing as earlier analyses:  that there is no breast cancer specific mortality or all cause mortality benefit from screening.  The authors attribute these findings (partly) to the availability of adjuvant therapy for breast cancer during the period of study and follow-up - when the treatment for something improves, it matters less if you catch it early.

The other finding that this prolonged follow-up reveals is overdiagnosis, which some have said is a misnomer. "Diagnoses without consequences" or "inconsequential diagnoses" have been suggested as alternative ways of describing these cancers, but I disagree.  The diagnosed cancers would have had no consequences had they remained undiagnosed.  But once they are diagnosed, there are consequences.  In an interesting study entitled Cure Me Even if it Kills Me, investigators demonstrated that people wanted cancers cut out or treated even when presented with statistics suggesting that their outcome would be worse by doing so than if they left the cancer alone.  So indeed, overdiagnosis is an important side effect of cancer screening - because folks who are overdiagnosed will undergo unnecessary treatments and psychological harm from the diagnosis.  The overdiagnosis rate for mammography is on the order of 25% or more.

Overdiagnosis is said in the abstract to be an inconsequential diagnosis because a.) the cancer will regress or  not progress; or b.) the patient will die of something else before the cancer manifests symptomatically or clinically.  (Imagine a patient just completing the last round of chemotherapy for a cancer and then being killed in a motor vehicle accident on the way home from the final appointment.)  Overdiagnosis requires prolonged followup to discern in the data because enough time has to elapse for all of the "consequential" diagnoses show their consequences.  Assuming they all have at the end of prolonged follow-up, any excess in the number of cases of cancer in the screening arm represents overdiagnosed cases.  This is the excess from screening.  There is a similar number of such "clinically silent" cancers in the unscreened group, but they remain hidden.

It seems possible, then, that because of overdiagnosis and lack of efficacy compared to annual breast exams, mammography may be, on balance, harmful.

I then learned that the USPSTF has recommended CT scan screening for current and former heavy smokers.  This in turn piqued my interest in the National Lung Screening Trial that was published in NEJM in 2011, but which I didn't give much attention to at the time.  I should have, because there are several interesting findings in that trial which have captured the attention of astute editorialists and experts.

This was a large (53,454 patients) randomized controlled screening trial comparing CT scan with Chest X-Ray in "high risk" patients (30 or more pack years of smoking and current smoker or quit in the last 15 years) that used lung cancer specific mortality as the primary endpoint, but that also followed all cause mortality.  The period of follow up was a median of 6.5 years, which is not long enough to comment definitively on overdiagnosis, although it was probably there.  Lo and behold - both lung cancer specific mortality (that is, people who died as a result of lung cancer) and all cause mortality were reduced in the screening group.  (There is an ongoing debate about whether cancer-specific or all-cause mortality is the most appropriate endpoint for cancer screening trials:  here are the Pro and Con positions.  The debate hinges on whether you worry about ascertainment bias in the determination of causes of death - and possible other issues as alluded to below.)

This post on PulmCCM describes the high number needed to scan (NNS) to prevent one death from lung cancer (about 950 scans [it has been pointed out in the comments below that I have misconceptualized this - What I really mean to describe is the NSN - the Number of Scans Needed to prevent one death]), the high false positive rate of abnormalities detected with CT scanning (about 95%!) and the high percentage of people getting scanned who had a positive finding on one or more scans.  Here are the deaths that occurred in each category and the differences: 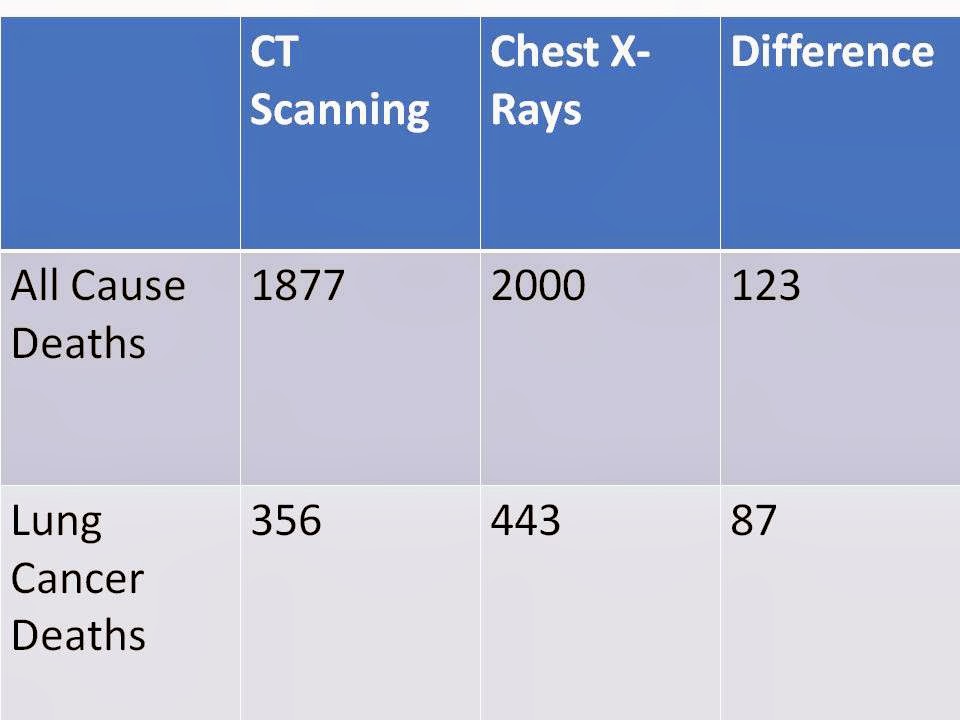 Both differences are statistically significant (although all cause mortality excluding lung cancer is not).  But pray tell, dear reader, how can CT screening for lung cancer save 87 deaths from lung cancer AND an additional 36 (123-87; 40% more) deaths from causes other than lung cancer (even though it lacks statistical significance)?  No explanation is offered for this curious finding in the article or any editorials I have read in relation to it.  But I have an intriguing possible explanation.

Because the randomized controlled design of modern cancer screening studies obviates concerns about lead time and length time biases, it has been taken for granted that it is an unbiased way of studying the screening question/problem.  But it is hardly unbiased.  People who are being screened by a given modality know their treatment/screening assignment and their behavior may change as a result of this knowledge.  Moreover, since 39% of people in the CT screening group had one positive test (which was highly likely to be a false positive, but which probably magnified cancer anxiety nonetheless), there was an extra impetus for this group to change their behavior as regards smoking (half of participants in each group were current smokers at baseline).  Compare this to a 16% rate of positive chest X-Rays in the control group.  Insomuch as getting a positive scan may serve as a "wake-up call" to change smoking or other behaviors, the differential effect of this lack of blinding in the NLST and other cancer screening trials cannot be dismissed.  And because smoking has so many hazards beyond lung cancer, it is certainly possible that changes in smoking status, if there were any, could have led to reduced all cause mortality as well, or at least contributed to it.  If data on smoking status at the end of the follow-up period in NLST are available, this hypothesis could be tested.

Overdiagnosis poses a particular problem in lung cancer screening that is quantitatively and qualitatively different than the one it does in breast cancer.  Firstly, the prognosis of all comers with lung cancer is much worse than that of all comers with breast cancer.  Secondly, the prognosis of smokers without cancer is worse than that of women without breast cancer.  Thirdly, the attributable mortality due to smoking is about equal parts cancer, heart disease, and emphysema.  Overdiagnosed patients with lung cancer have all sorts of risks of dying from other causes, especially if they continue to smoke.  Overdiagnosis has bigger implications if your risk of dying from other things is higher - this is why we shouldn't do screening colonoscopies in patients with advanced age or poor functional status.  And yet the USPSTF recommended CT screening for lung cancer up to age 80!

I remain confused about one aspect of all this screening business.  What if lung cancer screening does prevent lung cancer mortality, but it doesn't change the other kinds of mortality.  What if, in essence, we save a lot of people from lung cancer who then die from a heart attack 6 months later?  This seems to be an argument for focusing on all cause mortality, but I have not yet been able to find it articulated in this way.  If my thought experiment is correct, this is a bigger issue as we focus on those at higher risk of lung cancer, if their general health status is poorer and their risk of dying from other things likewise higher.  Granted, if you collect data long enough, all survival curves converge.  But perhaps "overdiagnosis" as a concept should be extended to those cases which, although cancer survival is prolonged, overall mortality from other causes which occurs only slightly after the expected time of death from treated or untreated lung cancer mostly negates the extended survival from diagnosed and treated lung cancer?  Let's call this "mitigated overdiagnosis."  This is something which merits further study, it it has not already been investigated.

In any case, whether the USPSTF should have recommended CT screening in the form they did is not at all clear to me.  It is recommended that we, as practitioners, discuss the implications of this study with our patients.  Here is how that conversation might go, as regards the big points:
How many patients, hearing these statistics, would wish to proceed with screening?  If they are risk adverse enough that a 0.3% absolute reduction in lung cancer mortality is important to them, would it be better to stop smoking and call it a day?